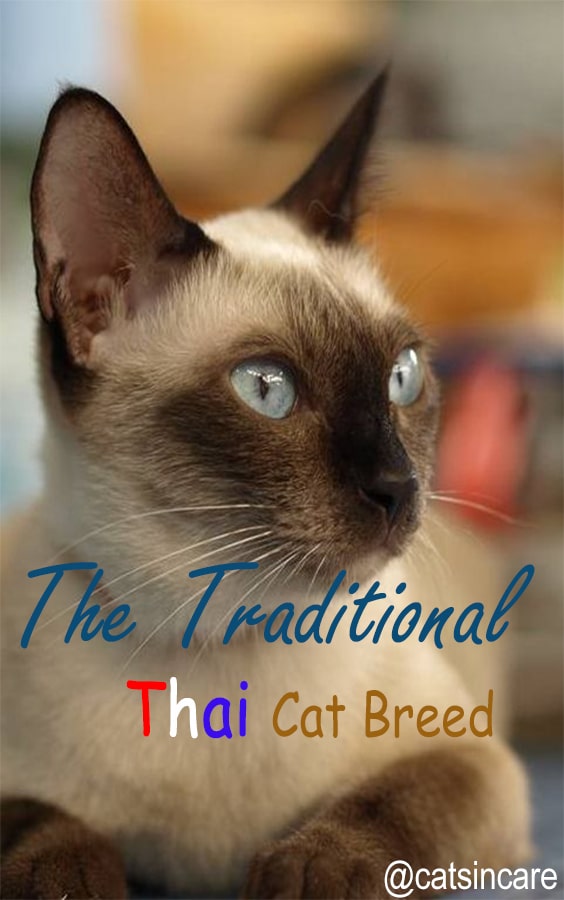 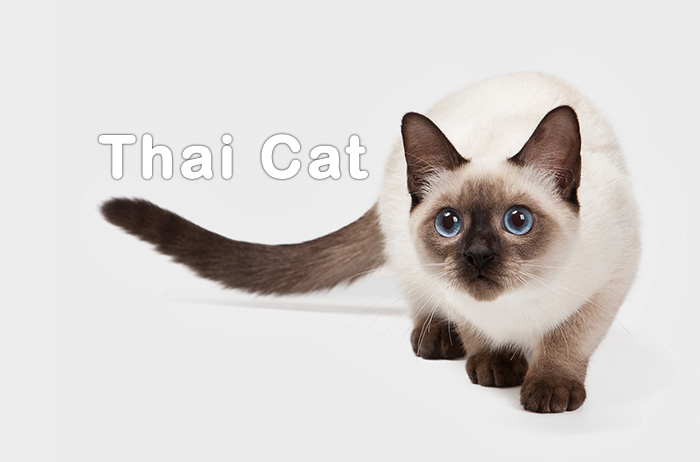 Thai is an old cat breed, but newly classified. Thais are related to the traditional Siamese cats, but very different from the western and latest Siamese breed. It is breed that is meant to preserve the native and pointed cat of Thailand in its very original form. Thai is a natural cat of Thailand. Though it is known in Thailand as the old style Siamese, the name Thai is the official name conferred on this cat by TICA and many other cat registries in Europe. These cat breed have colorpoint and are shorthaired with blue eyes, beige white body and dark color points that are of moderate nature. For some people the Thai cat is just another Siamese cat. The Thai is a natural cat breed from Thailand and closely resembles the traditional Siamese cat. Breeders around the world have come together to save and protect this traditional and natural cat breed from Thailand and as of today the Thai has achieved the championship status in TICA that enables it to compete with other cat breeds.

The history of this breed dates back at least 700 years and the people from Thailand have a special place for this cat breed in their hearts. In Thailand this cat breed is known by the name Wichienmaat. This breed was nurtured in the Thai kingdom of Ayudhia and continued the breeding as this kingdom was conquered by the Kingdom of Siam. The breeding is still going strong in present day Thailand. It was in the 19th century that the British citizens discovered this breed with extra ordinary blue eyes, white body and pointed dark colors. This cat was only found in the Siam the ancient Thailand and was not found anywhere else and decided to bring the cats home and called them Siamese. The main aim of the European breeders was to improve the points, making them more consistent and appealing. The breeders then produced cats with brilliant blue eyes that were deeper as compared to the ones found in their native lands, with a stylish body and head. The improvements were loved by many people, but there were others who preferred the traditional and old look of these cats as compared to the modern look.

By the year 1980 breeders chose to breed the Siamese with a stylish look, and the traditional ones were not much in demand. In the 1980 the first club dedicated to the old-styled Siamese was launched in Europe and in America. The World Cat Federation granted this breed the championship status and renamed them as Thai to differentiate the old style Siamese from the modern and show variety Siamese. Breeders later on imported the Thais to help preserve the healthy gene pool for this breed.

The prices of the kittens start from $700. The key factor in identifying the Thai from the other cat breeds with short hair and pointed patterns is the shape of the head and body style. The Thai variety is shorthaired, pointed and foreign type cat. This cat breed’s length is moderate, flexible and agile. This medium boned cat has tail, legs and head all medium boned. The coat is flat and short. It is loose enough to feel the silky and soft touch. Everything about this cat is in moderation. The feature that stands out in this cat is its unique head structure with a flat forehead. The head has a good amount of width and the sides are rounded. The muzzle is wedge shaped that project from the round cheeked head. The end of the muzzle is spade shaped that is not very pointy and not very blunt, just right. The ears are set high on the head and have a broad base. Thais come in any point colors and solid points, tabby points, tortie points and torbie points. White points are not permitted.

Thais have an interesting personality and is much similar to the known Siamese. They are fun loving, people oriented, intelligent, curious, and active along with a good sense of humor. When you have a Thai around the house, then you will feel like you are staying with children. They will show interest in all the activities that you do each day following you around the house and trying to help you. These cats have the ability to talk and will never leave an opportunity to talk. Though he will not be loud, but he can chat with you for a longer time. They will communicate with their owners by jumping on their shoulders and by tapping with their paws. These cats need daily attention and response from you. These cats require high emotional maintenance.

Generally Thais enjoy a very good health and are not prone to serious ailments. Due to their overall good health these cats can live up to 15 to 20 years. Thais don’t need any extra grooming since they have a short hair. Once in two weeks brushing is enough to remove loose hair and these cats are self cleaning. Males will weigh between 9 to 14 pounds while females weigh between 6 to 10 pounds. The height ranges between 21 inches to 23 inches.

Thai are friendly, cuddly and enjoy the company of people. Their grace can easily garner attention and affection. They love being with children and are extremely sociable cats. These cats also enjoy the company of other pets in the house. Since they are talkative by nature they will never miss an opportunity to convey their feelings. Clever and very active, these cats’ breeds love to be with people whether it is for playing a game of fetch with their owners or even guests. They can even snuggle up to you and sleep on your lap. These cats hate being alone in the house without any company so if you are out for work for longer hours, then this cat breed is not suitable for you.

Thai Cat with Children and Pets

Thais are very family oriented and loyal cats. They will enjoy the company of children and other pets around.