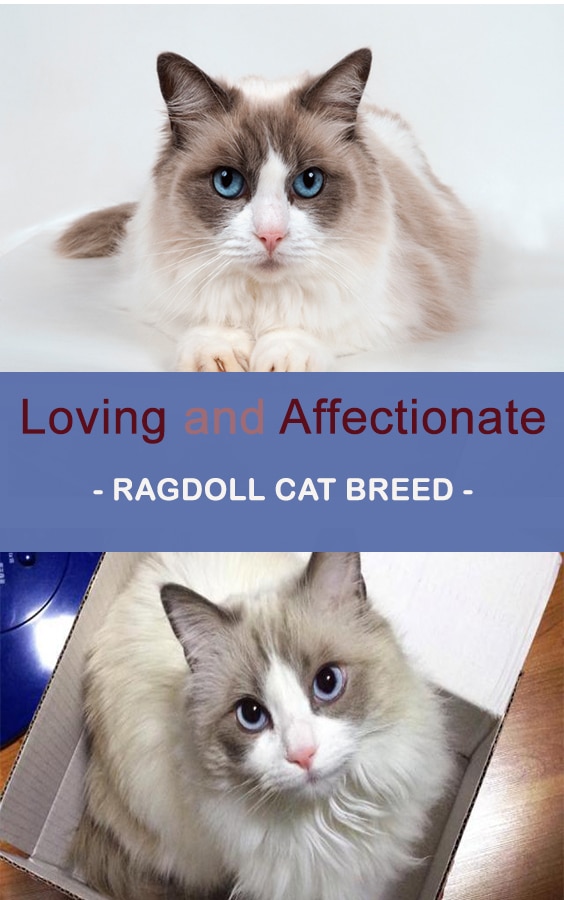 Ragdoll is a large sized cat, but don’t go by its appearance this cat is extremely affectionate. One of the specialties of this cat is that it has the ability to go floppy with joy when someone cuddles him and this trait has given him the name Ragdoll. They love to be carried around by their owners just like small children love carrying their dolls with them.

Though his cat breed is named Ragdoll, they are actually very huge with male cats ranging up to 20 pounds, which is at least five pounds heavier than an average cat breed. Female Ragdolls weigh slightly less and start from 10 pounds and can go up to 15 pounds. Ragdolls have an attractive appearance and to complement their appearance these cats have very attractive blue eyes.

If you don’t have a friend, then this particular cat breed will be a good companion who will happily greet you at the door, play a game of fetch and even sleep with you at night. Ragdoll was created by an American breeder Miss. Baker and is well known for their docile temperament. This semi-longhaired cat is one of the largest cat breeds and has the ability to blend with any kind of home environment.

All American, the Ragdolls were first created by Ann Baker from Riverside, California in the year 1960, which makes this doll like cat a very new entrant to the cat world. She had a domestic longhair cat with a white colored coat with a genetic pattern of either seal or black tuxedo pattern. Baker used this cat as a foundation cat and used it to breed with other longhaired cat breeds whose ancestries were unknown. These cats were either owned by her or must have been around her neighborhood.

Her main aim was to create a cat breed with a gentle, affectionate personality along with long hair and looked very attractive. All these features were found in the Himalayan and points found in the Siamese. The final result was a cat breed that would go flop whenever anyone picked it up. Later on various other longhaired cat breeds like Birmans, Persians, and Burmese were also used in the breeding program of the Ragdoll.

A lot of other breeders also entered the market and started breeding Ragdolls. She owned the trademark and created a franchisee for the Ragdoll. She also created her own ragdoll registry by the name International Ragdoll Association (IRCA). A lot of breeders separated from Baker and who are not a part of IRCA formed a Ragdoll Fancier Club International with the only goal to give the breed a standard and to gain recognition from cat registries. The CFA registered this cat in the year 1993 and gave them complete recognition in 2000. Many other registries have now recognized this cat breed, which includes ACFA, and TICA. Ragdoll is accepted in four colors and three different patterns.

Ragdoll is cat that is large with a semi-long hair. They come in four different pointed patterns primarily the mitted, bicolor, van, and colorpoint and six colors primarily blue, seal, chocolate, lilac, red, and off-white . Solid Ragdolls have dark and well-defined points. These cats take time to mature and usually take four years. They have proportionate legs that are perfectly suitable for their large body frame. The genes for the colorpoint are responsible for the striking blue eyes. Although these cats have long hair, but it consists more of guard hair that is silky, and there is lack of dense undercoat resulting in less tangles and reduced shedding.

Ragdolls have white front feet that looks like mittens. These gentle cats have a sturdy body that is long with strong bones to match the body. The large blue eyes give them an overall cute appearance.

Ragdoll is docile and sweet natured cats with a personality that can make anyone fall in love with them. These characteristics are passed on to the Ragdoll from Birmans and the Persians a trait that must have passed on to this cat due to genetic mutation. Their extreme levels of docility have made a lot of breeders from UK to try to breed Ragdoll that does away with the floppy behavior with concerns that it can harm the cat. According to breed standards of this cat, they are described as a cat breed with affection, intelligence, relaxed temperament, easy to care and gentle. So if you are looking for a cat that is active and playful then this particular cat breed is not for you. This chilled out cats will allow them to be dressed as dolls and carried around like babies.

They are generally very healthy cat breeds, but can suffer from heart problems, and bladder stones. Kittens have a quick growth spurts and hence it is essential to them to have a healthy diet all the time. The diet can include food according to their age and whatever most cats love to eat. They need continuous food until they stop eating. Once they reach their full growth after four years you can limit the amount of food you serve.

The long and silky coat is easy to care for. Due to their gentle personality they will love all the attention they receive while brushing their coat. Trim their nails every 10 days and brush their teeth regularly to prevent dental problems.

These cats maintain their kittenish behavior until adulthood and enjoy a good game of fetch. They are more than willing to learn to walk on the leash. They will not jump on cabinets, but will rather spend their time sleeping or lying near their owner’s feet. They will follow you from one room to another and are good lap cats. These cat breeds have moderate energy and have a laid back behavior. They are friendly with children and get along well with dogs. These cats can live up to 15 years if they are kept healthy and indoors.

Ragdoll with Children and Pets

Ragdolls gel well with children and other pets like dogs. He can be a best friend for your children, but you have to ensure that kids don’t take advantage of his docile and gentle nature. He will rarely extend his claws while playing with children. Ragdolls will cost anywhere between $500 and $1000.

Ragdoll is a family-oriented, loving, caring and affectionate cat breed that has the ability to learn and pick up tricks quickly.