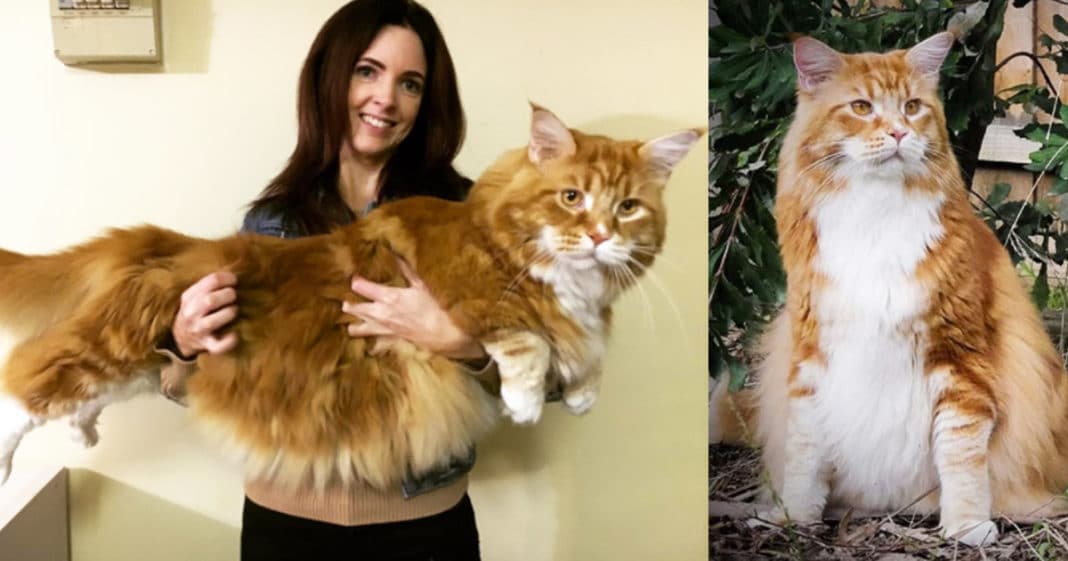 Omar, this Maine Coon is the latest new sensation on Instagram. Omar is not the average looking cat; he holds the distinction of being the longest cat weighing twice as big as a dog a rare feature among cats. This huge cat and his images on instagram have gone viral after he was featured on the Cats of Instagram account, which has more than 9 million followers. This huge Australian Kitty has already more than 40,000 followers since Omar’s owners made an instagram account just a few weeks ago and the numbers are increasing by the day. A huge star cat in the making for sure. 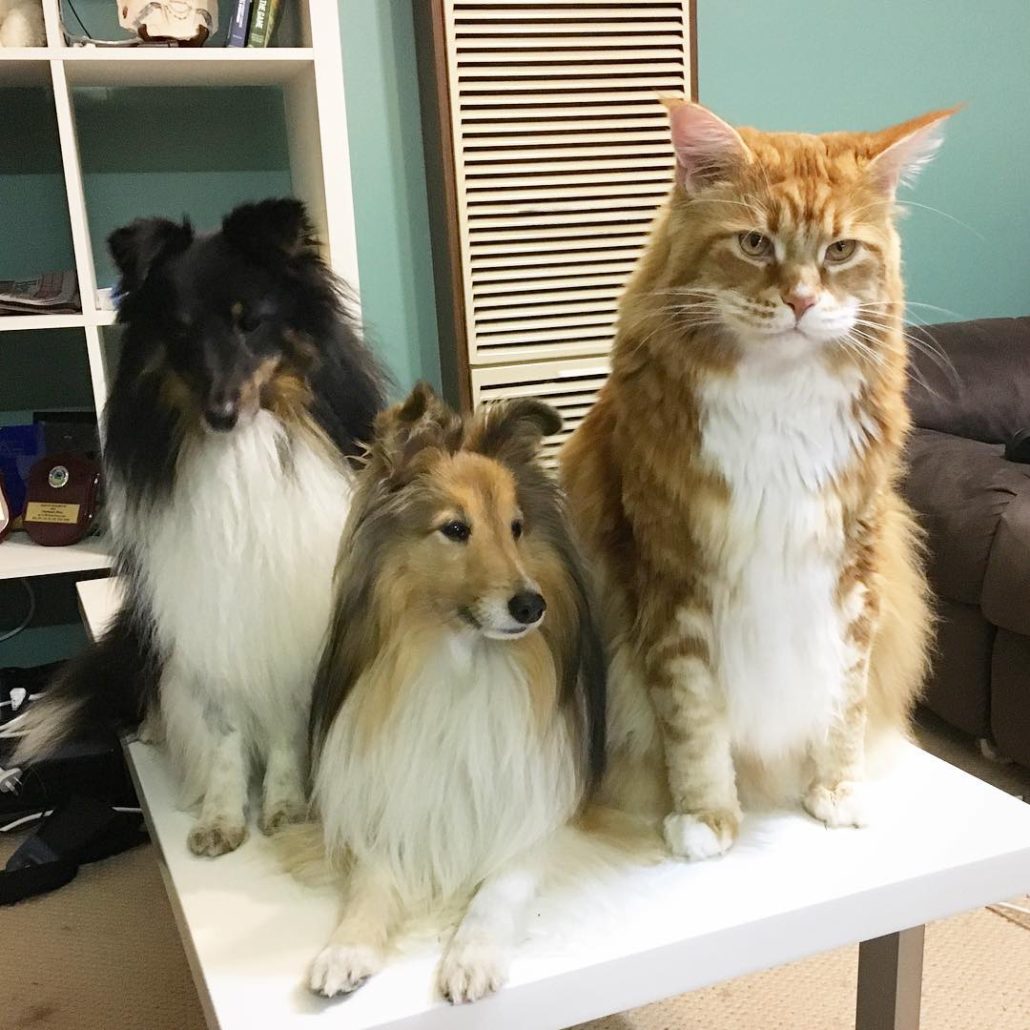 This giant Orange kitty is three years old and belongs to the Maine Coon breed, which is known to be a large cat. He is three times the size of a normal feline. Maine Coons tend to grow more than 20 pounds, but Omar has surpassed these traits and weighs 31pounds. This unique physical trait has encouraged officials from the Guinness World Records to include this kitty in their catalogue of super achievers after seeing his image on the social media platform. The current record holder is a British cat Ludo, who measured 3.8 feet long in 2015. According to his owner Stephanie Hirst of Melbourne, Australia, Omar is 3.9 feet long and has a good chance of getting his name included in the Guinness World Records. She is presently waiting for confirmation from the Organization. According to his owners, Omar might get confirmation from the organization, but they are pretty sure that Omar might still grow. 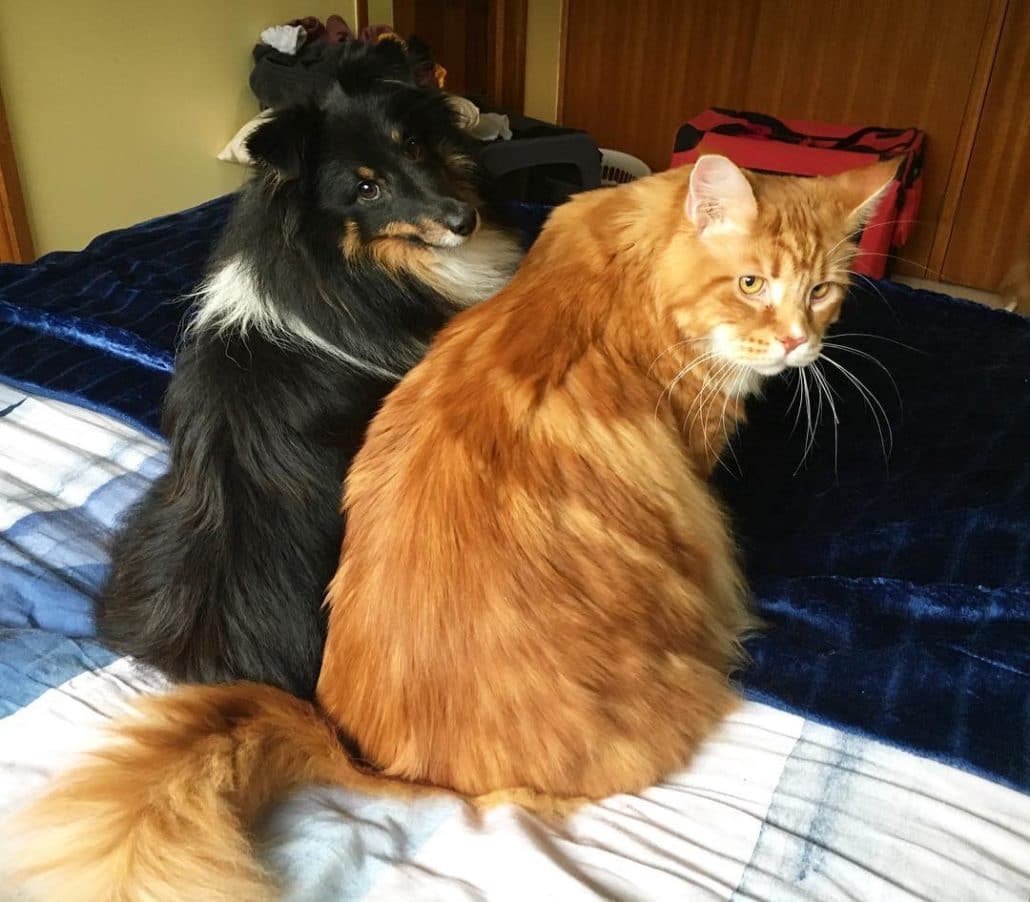 In one of the instagram images, Omar looks to have grown twice the size of their pet dog Penny. 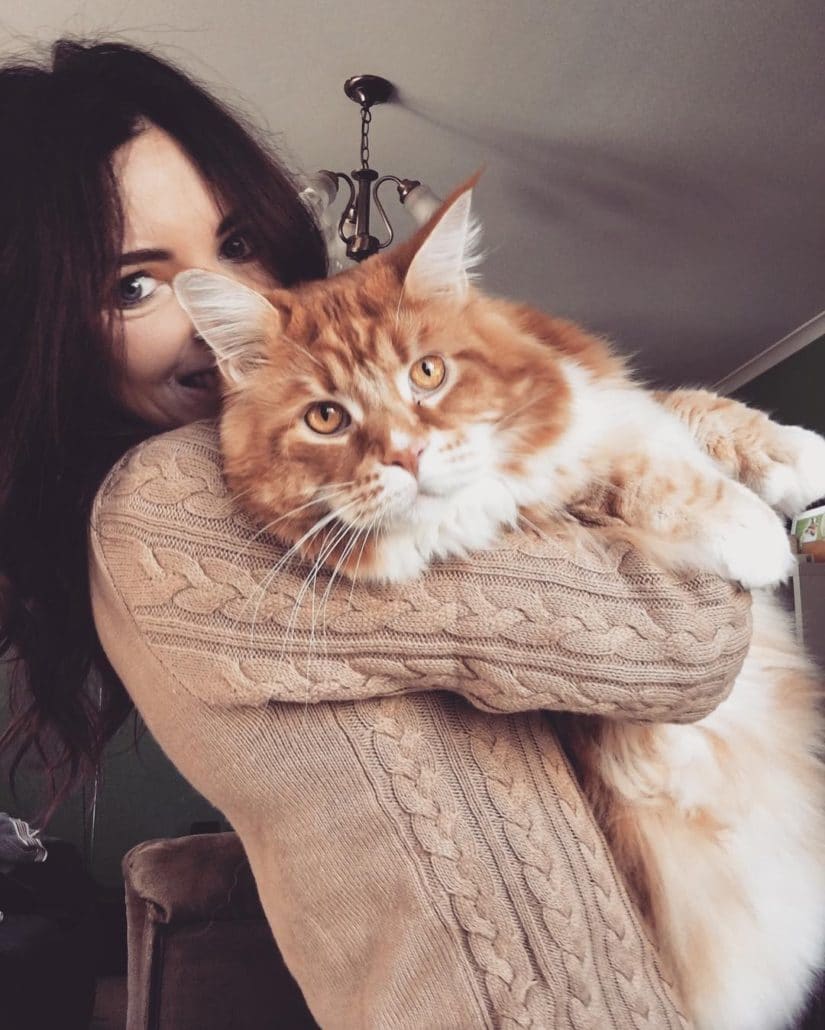 This star Maine Coon according to its owner Stephanie Hirst has been inundated with requests from various countries to feature in various commercials. Miss Hirst says Yarra Valley Water even wanted their cat to promote its Choose Tap campaign, but Omar seems to be a reluctant star. Omar even appeared on Channel 7’s Sunrise program, but hid under the bed, while his owner spoke to the presenter throughout the program. 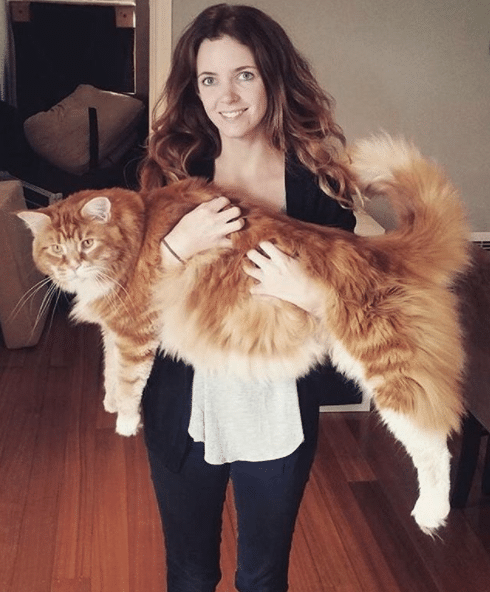 Stephanie Hirst and her partner got Omar home when he was just a kitten. He was a tiny cat when they got him, but started growing rapidly within a year. In a year he weighed 10kgs. 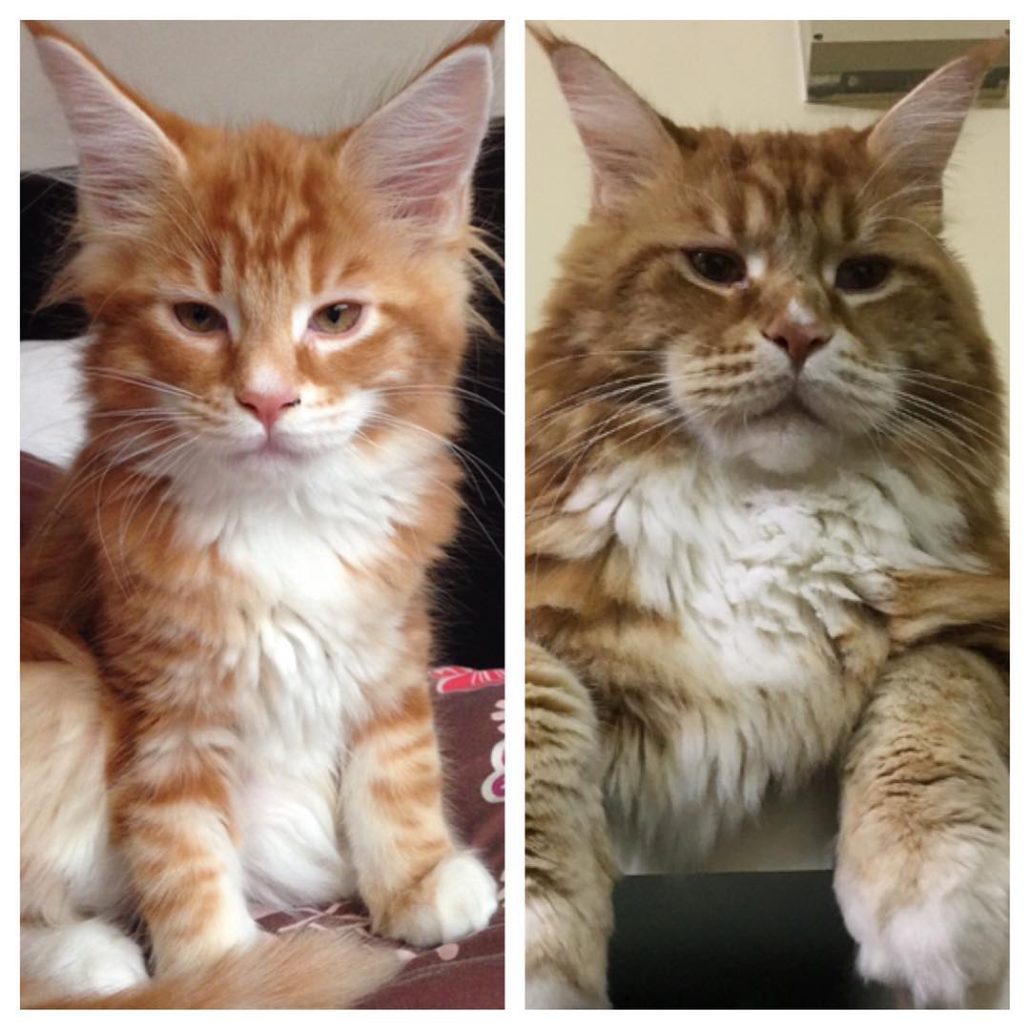 He is quite a handful feline now. The day begins at 5am in the morning for Omar and his breakfast includes scoops of kibble made especially for Maine Coons and enjoys snoozing outside on the trampoline, as he is too big for Hirst’s bed. For dinner Omar indulges on his favorite raw Kangaroo meat. He takes up a lot of space on the bed and demands a lot of love and care, a characteristic trait found in Maine Coons. Omar doesn’t jump the fence and likes to hide in places like kitchen cupboards, which seems to be his favorite space other than lazing on the trampoline. 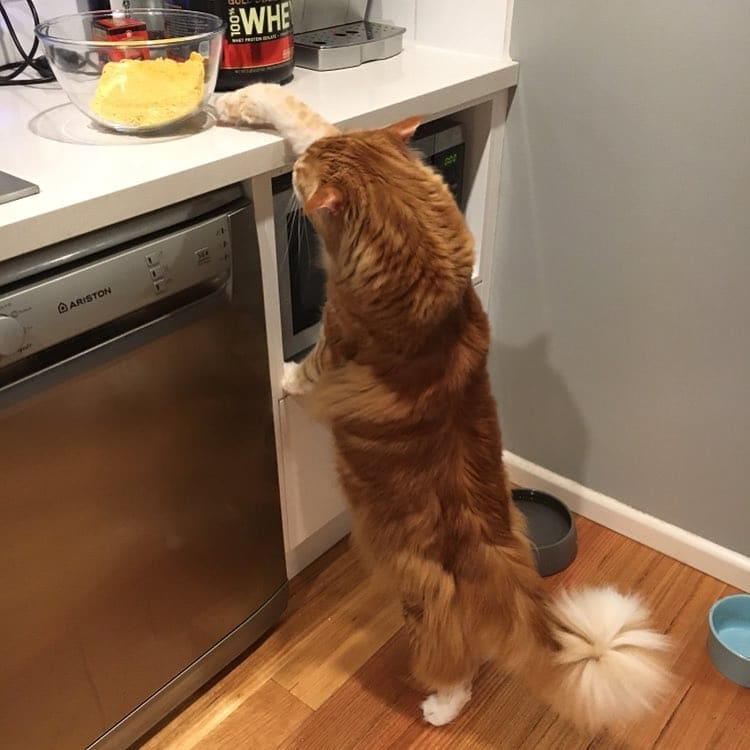 Omar is an expert at opening and sliding the doors of the house. He can easily open the kitchen cupboards, shower doors and wardrobes. He can reach out to food placed on the kitchen counters with a lot of ease as seen in the pictures shared on his instagram accounts. 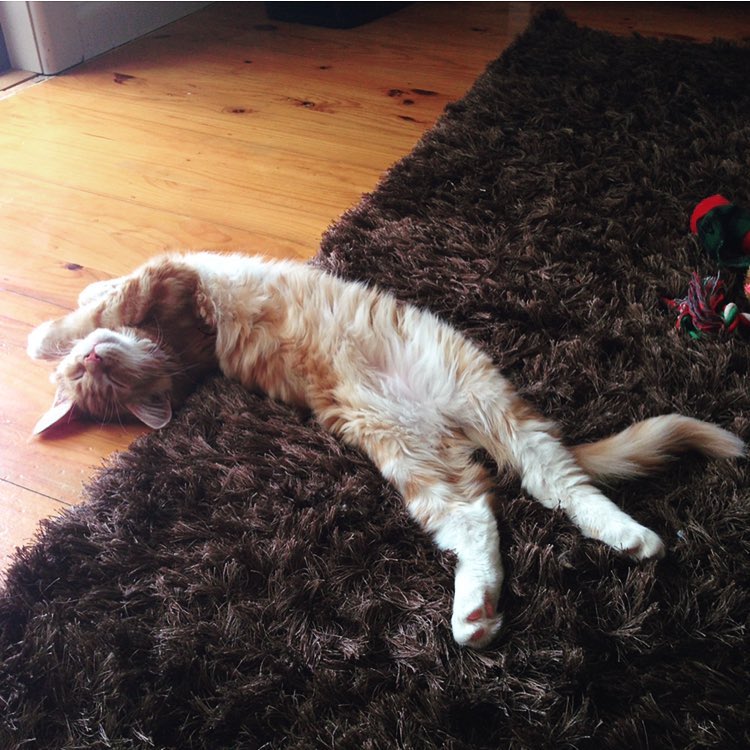 He likes to be on his own and enjoys going to places where he likes and will find out ways to achieve that. Looks like a stubborn guy! This quiet cat tries to stay away from any trouble and prefers to remain placid. The trampoline on the lawn is the most favorite place where Omar likes to relax whole day. He loves sleeping on his dad as seen in one of the images; guess he prefers a lot of space to stretch his body. Omar and his owner are interested in having a good chat with his fans and are happy to have an interactive session sometime in the future. 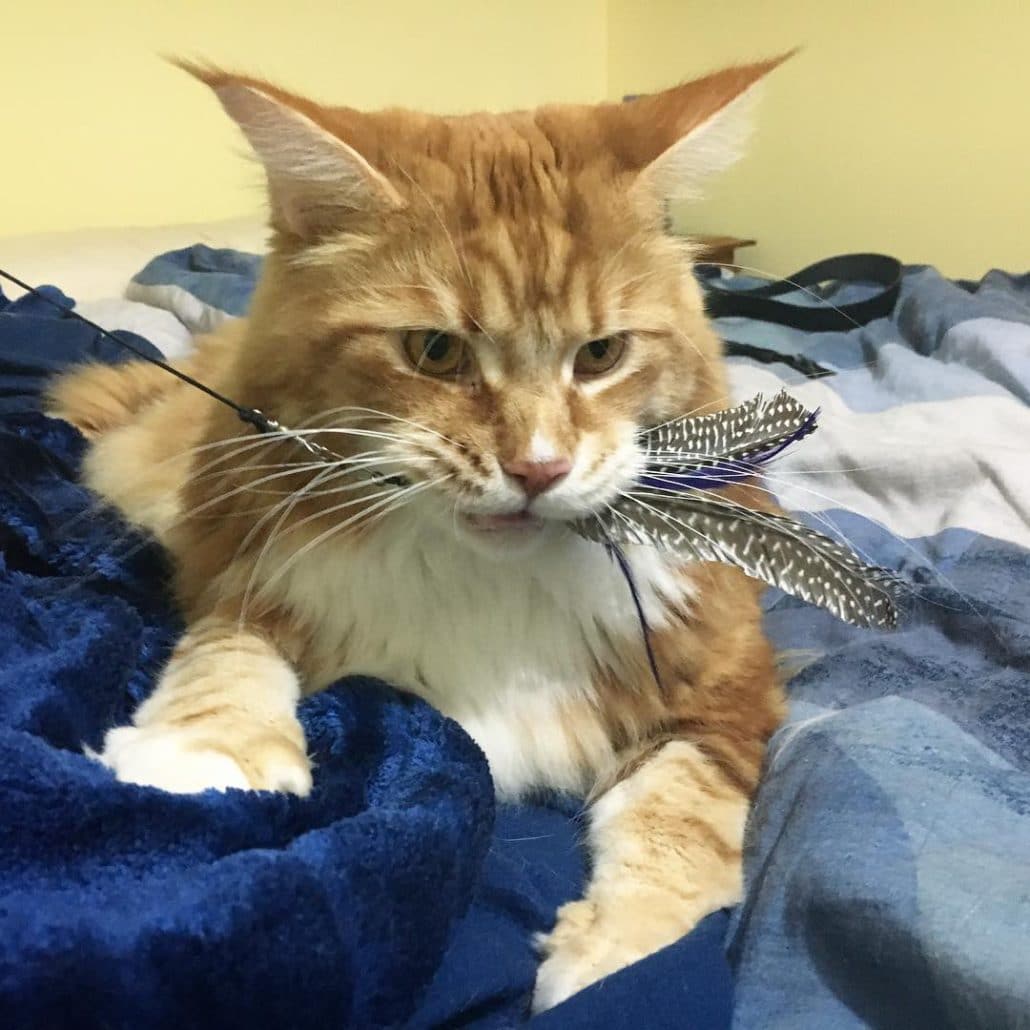 Maine Coons are an affable and good-natured cat breeds, and the behavior of Omar proves this fact. The secret for his impressive frame could be his diet, which includes raw Kangaroo meat. Even though Omar may be a star on the social media platform like Instagram, he is just like any other cat except for his size. He loves being cuddled, waits and longs for his food, loves getting inside boxes, enjoys sitting on the scratching post and sofas. Yes, his size allows him to reach out to places most average cats can’t even dream of reaching, which is always a blessing in disguise.

Aristocats Names for your Feline Friend

Almost Nobody Could Find The Cat Hiding In These Pictures

Then v/s Meow: How Technology Has Changed Cat’s lives