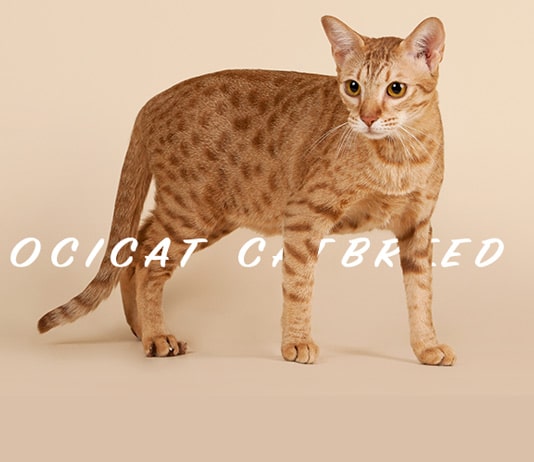 OCICAT is an exotic looking cat breed that has the ability to garner people’s attention and steal their hearts. Appearance wise the Ocicat looks a bit similar to a cat in the wild due to their spotted and muscular body structure, but the truth is this cat is a completely man-made cat breed that brings in an exotic value to your home. These cats are always ready to attack or pounce on things like a toy or even a mouse running around the house and have this attacking alert look only due to their alert stature and physical appearance. If you like a domestic cat, but would want to have the spots like that of a leopard, then you should consider these handsome looking strong cat breed home. The weird similarity to the Ocelot a spotted and wild cat is the reason why these cats are called Ocicat.

Relatively a new cat breed the Ocicat was developed accidently due to the mating of a seal pointed Siamese and an Abyssinian in the 1960’s by Mrs. Daly of a Cattery in North America in order to make an Abyssinian pointed Siamese cat. The kittens that were born were bred back to brown point Siamese. The kittens that were born out of this mating had different colors and patterns, but one kitten among them had a coat with golden spots with cream background. This kitten looked very similar to an Ocelot and hence was named Ocicat. Daly continued breeding Ocicats and slowly brought in the shorthair in the breeding program. This brought in the strong muscles, bone and silver color. By early 1980s the popularity of Ocicats increased and these cats were granted a provisional status in North America. This restricted the crossbreeding to other cat breeds except Abyssinians. Ocicat attained the status of a champion in America by the year 1987. The first Ocicats landed in Britain in the year 1988 and have received the same kind of overwhelming response that this cat received in America.

The first Ocicat was exhibited to the CFA in 1965 and in 1966 CFA accepted this cat for registration. The parents of this breed were registered as Abyssinians and American shorthair and this was an error, but due to this error all the new breeders of this cat breed added the American shorthair as the parent breed for the Ocicats for a few years altering the body of these cats from the slim Siamese to more Cobby and also adding with it more colors that were not available before. Daly took a break from breeding Ocicats and within this timeframe other breeders started the breeding program and this resulted in increasing the gene pool. At present, this cat breed has gained popularity worldwide and has a strong fan base. 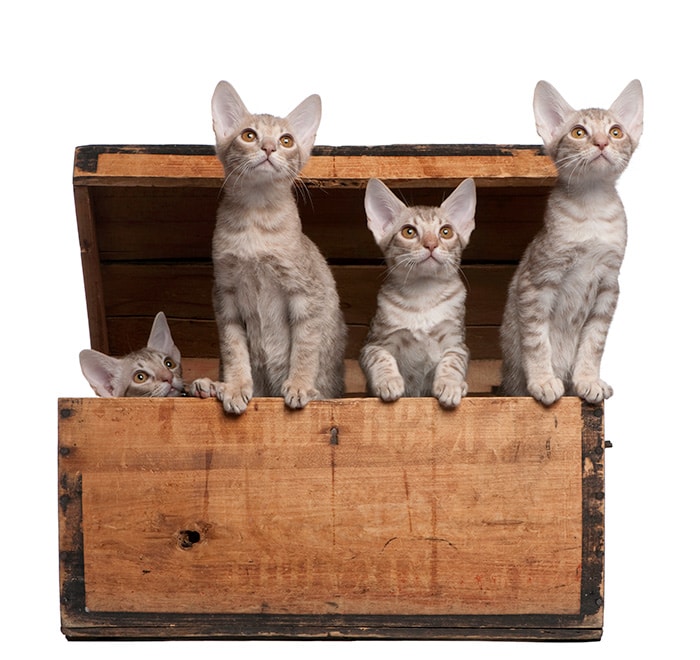 Ocicats come in one pattern primarily spotted, but have many different colors. The colors include brown, chocolate, blue, lilac, cinnamon, Fawn and the silver variant of these colors. The silver adds the glamour while the variety of colors and spotted pattern a wild appearance. The spots that look like a thumb, covers all of their body. Sometimes classical tabby pattern will appear, but these patterns are not qualified to compete. Every hair in an Ocicat has many bands of ticking. A fully grown Ocicat is a big cat with a muscular, solid body and spotted firm coat. The males are every athletic and weigh between 9 to 14 pounds and the females weigh between 6 to 9 pounds. These cats have a large and almond shaped eye with an angle that gives the cat an exotic look.

Legs are medium and strong to support the athletic frame giving an impression as if it is going to get into action. Ocicat is an average to large sized cats with a head that is wedge shaped, longer instead of being wider, and a shallow curve that flows from the muzzle to the cheek. The jaw is slightly square and the muzzle is wide. The head of Ocicat is placed on an arched neck giving it an elegant look. The body has enough muscles and bones, which gives it a wild cat look. The tail is lengthy and is not tapering at the base. The coat is short and Ocicats can live for longer durations up to18 years and the price for these cats can start from $600.

Though Ocicats may look wild these cats can be very loyal to their family. These confident cats are extroverts and can get along well with guests. They will constantly look out for playing games or else will sit on your lap. Ocicats are highly smart and can quickly learn tricks. They are quite possessive about their toys and will not let others taking them. These graceful cats are a bundle of energy, which can encourage them to jump to high places. Due to their extremely social nature these cats hate being left alone for longer durations, but will adapt to home rules.

An adult cat will require about 70kcal for each kilogram of body weight every day. Ocicats generally do not overeat. Usually healthy Ocicats are not prone to health issues and requires regular vaccinations to keep them healthy. Cleaning teeth and ear is recommended. Due to their shorthair Ocicats need very little grooming, but will enjoy the time you spend with them for grooming or brushing. They do not need regular bathing. However, they will tolerate once a while bathing.

Ocicats are easy to train and will learn the tricks pretty easily. They are equally friendly and affectionate towards strangers and are not at all lazy and moody; instead they are full of energy and love to play a game of fetch. These cats are easily adjustable and will obey your orders.

Ocicat with Children and Pets

Ocicats get along well with children and other pets in the house. They are an ideal pet cat for homes with families, children, dogs and other exotic pets. This is a low maintenance cat breed that loves to hang out with other pets in the house, and is very outgoing by nature. These cats are ideal for active families. They will learn to walk on a leash and are very dog like.

Ocicats though have a wild like appearance these cats can really charm you with their love, affection and energy.