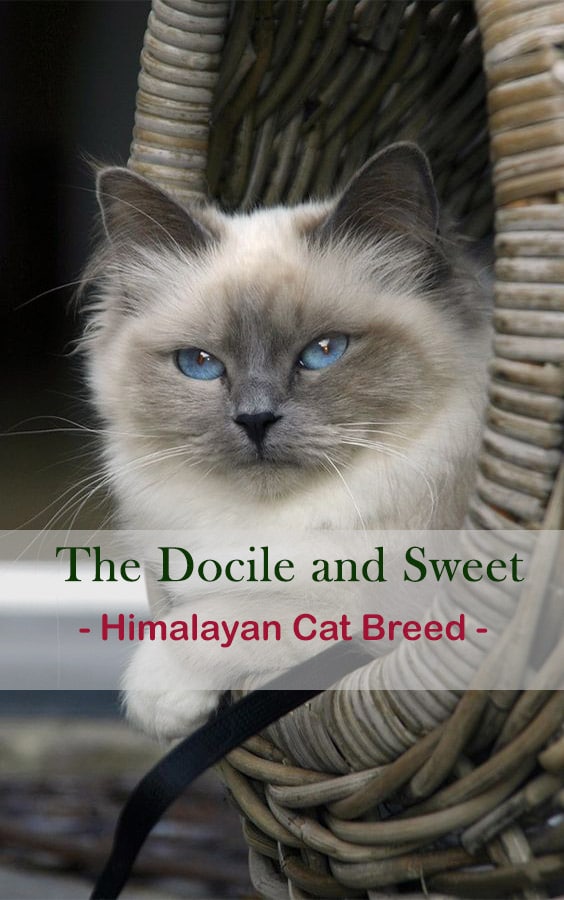 Popularly called as Himmy, the Himalayan is version of Persian cat with color point. The Himalayan was created after crossbreeding the Persian with the Siamese. The breeding continued until all the desired characteristics were achieved by the breeders. The genes of both these beautiful cat breeds in the Himalayan have resulted in a cat with characteristics that are best in both of them. This is a cat that is people oriented with the personality of a Persian that is docile as well as the sweet personality, color point and blue eyes of the Siamese, an amazing combination of both these wonderful loving cat breeds.

In Europe the Himalayan is referred to as ColorPoint Persian with the long hair of a Persian and the blue eyes of the Siamese.

The idea of creating a new pointed cat breed with the Persian along with the Siamese had been the desire of breeders. The breeding programme started in the North America and England as early as 1920 using the Siamese breed and Persian cat breed, but the actual recognition for this cat was given only in the year 1957. The first color point long hair cat was born in the year 1935. Two Harvard employees crossed the Siamese with a black Persian to establish and study the different characteristics that were inherited and not to create a new cat breed. The kittens that were produced had shorthair that was black in color. The second litter also had the same above characteristics. The female cat from the second litter was crossed with the male cat of the first litter and the kittens that were produced had the Siamese type body and color and long hair of the Persian. It looked more like the present day Balinese rather than the Himalayan. After studying the genetics these Harvard students closed their experiments.

In the same year some British Breeders decided to produce a cat breed with the hair like a Persian and color point pattern. Even breeders from America also joined the experiment. Due to the world war ll the breeding programme was aborted. It was only in the year 1950 that a breeder from America Marguertia Goforth was successful in creating a color point Persian like cat breed. This cat got recognition from the ACFA and the CFA as a breed in the year 1957 and got the name Himalayan. This cat breed got its name from other animals like a Himalayan rabbit due to the same color point pattern. After a few years, all the major cat registries recognized this cat breed. The British breeders created the same cat breed and the Himalayan was recognized as ColorPoint Longhair.

Today the Himalayan cats are recognized as a part of the Persian cat breed and are known for their ColorPoint pattern. This led to a lot of controversy between breeders and many did not agree to this. Persian breeders were not happy about introducing the hybrid cat into the Persian pool, and the Himalayan breeders were unhappy about losing their breed, which they had created after so much hard work. Some cat registries decided to split from the CFA to form the National Cat Fanciers Association (NCFA) due to their disagreement.

The Himalayans have a round face with rounded basic structure for their face. The head is rounded, huge and set on a thick neck that is short with powerful and broad jaws. The cheeks are very prominent and full. The ears are small, tipped, round and tilted forward. The ears are placed with a distinct space between them and do not disturb the round shape of the head. The eyes are rounded, large, and full and give the face a very sweet expression. The eyes of the Pointed Himalayan are blue in color while the nonpoint ones have copper color except in golden and silver colored tabbies. The golden and silver tabbies have green eyes.

The Himalayans have a Cobby type body with low legs. These cats are medium to large sized with a heavy bone. The tail is short and according to the body. Himmy has a long and thick coat that is glossy and fine to touch. The hair is longer all over the body including the shoulders. Even the tail is full of hair. They come in the following ColorPoint seal, lilac, chocolate, red, cream tortie, chocolate tortie, seal lynx, blue lynx, blue cream lynx, lilac lynx, tortie lynx and lilac cream lynx. The body comes in various color shades from white to fawn with color only on the face, ears, tail and feet. Himalayans come in various looks primarily the traditional and the extreme. The extremes are the one seen in shows with a flat face and hence suffer from breathing difficulties. The traditional ones are old fashioned with a face that is not flat and a proper nose that helps in easy breathing.

Himalayans are sweet and less agile, very similar to that of Persians. This cat is a good lap cat and enjoys all the petting it receives. Himalayans are very caring, but selective. They shower their attention only on their owners and are very careful about new people. They hate loud ambience and prefer staying in quiet surroundings, but enjoy playing with quiet children. Himalayans have a soft and sweet voice and will let you know their feelings. They like being on the floor and will not jump over kitchen counter and refrigerators.

Himalayans suffer from some hereditary problems like respiratory diseases and kidney disease. They need a good nutritious food to stay healthy and care should be taken to not to overfeed these cat breeds as they are prone to obesity and their docile behavior will tend to compound the problem. The coat requires daily care. They must be brushed and combed daily to prevent tangling. The flat face of these cats should be cleaned properly as tear drops can stay on the face.

Himalayans are friendly with their family members and are not great with guests and new people unless they get used to them. They like chasing and playing with toys and interact with quiet children. Due to their docile nature they prefer quiet surroundings and like to be left alone or sit on lap for petting.

Himalayan with children and Pets

Himalayans are not a good cat for homes with many children who are very playful. They enjoy company of gentle children and pets. These cats are friendly with dogs that don’t chase them and increase their nervousness.