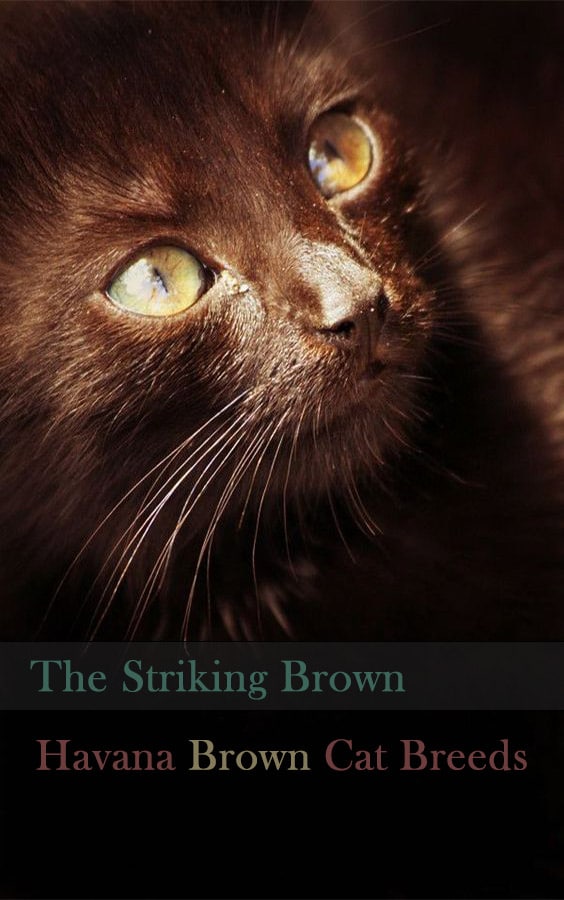 Havana Brown is an attractive cat with mahogany color coat and bright green eyes that has the ability to arrest the attention of people. 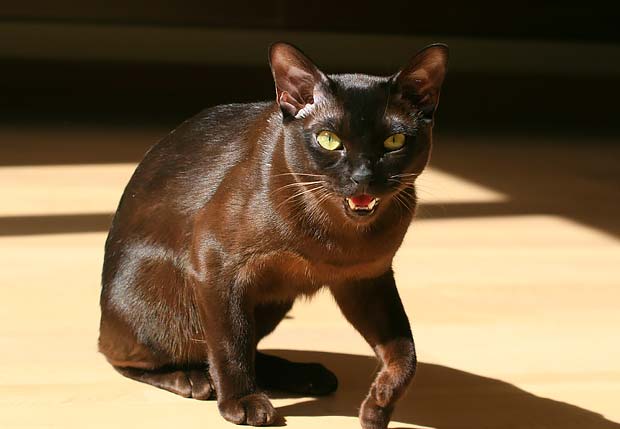 The fur of Havana Brown resembles a Cuban cigar. The Havana Brown is a hybrid cat created by crossing the Siamese cats, which is the base cat for a number of cat’s breeds with the Domestic cats to create a cat that has chocolate brown color with emerald eyes. According to one cat registry in America, these cats also come in lilac color and are called simply Havana. These lilac Havana’s are pinkish grey with matching whiskers and the same applies for this cat breed. The Havana Brown is a very human oriented cat and if you don’t have time to spend with them it is better not to get the Havana Browns as pets. The unique thing about Havana Brown is that these cats use their paws to investigate and demand attention from people.

The Havana Brown has a silky coat that shed very little hence very little grooming is required. Havana Browns are a very rare cat breed and it is estimated that there are only around 1,000 of these worldwide.

This striking brown color cats originated in England after some breeders planned a selective breeding technique between the Siamese and the domestic black cat. The main aim of this experiment was to create a cat breed that was self-brown. The first import of this breed to America was in the year 1950. These cats that came to America were the base on which future Havana brown were created. In England, the Havana follows the Siamese while in the North America the breeders have stilled followed the standards and looks of the first Havana Brown imports.

Due to the receding gene pool of this breed the breeders were permitted to crossbreed with domestic shorthairs of black or blue color, certain types of oriental shorthairs or seal point or chocolate point Siamese. The first cat that was registered as a Havana was by the name Elmtower bronze idol whose parents were a black colored shorthair and a seal point Siamese. The modern day British Havana strains have more Siamese influence as compared to the American ones.

The solid brown cats in England and Europe were known as Swiss mountain cats, but the breeding of these types of cats was discouraged, but in late 1950 some British breeders crossed the chocolate and seal pointed Siamese cat breeds with the black domestic shorthair and also the Russian Blues to create attractive chocolate colored cats with emerald eyes. It is the tobacco like color of this cat, which was responsible for the name and is in no way related to Cuba. Now the Havana Brown is recognized by the different organizations like the TICA, CFA, and AFCA.

Havana Brown is an elegant short haired cat breed that is available in two colors primarily rich mahogany and lilac. Both these color coat have matching whiskers. Both the color adds to their beauty along with stunning emerald eyes. This highly intelligent cat has a rich and glossy coat with a medium sized body that is slightly heavier. Their body comes in a muscular structure that is firm, and ripples under the glossy under coat. This certainly adds some grace to their appearance. Male cats are larger than females weighing around 8 to 10 pounds and female cats weigh around 6 to 8 pounds.

The head of this particular cat breed is also very attractive other than its rich color. The forwardly tilted erect ears give the feeling of alertness. The muzzle is frequently referred to as a corn-cob look or like a cigar that is rolled. This look is a result of a fold at the muzzle, a full whisker pad, and square chin all of which gives a blunt look. The Havana kittens are born in lilac color or brown with some having light tabby markings that fade away when they reach adulthood. These cats have the distinction of retaining their kitten behavior to their adulthood.

The Havana Brown has a very attractive personality, which is combined with good looks. These cats are affectionate, loving, gentle, intelligent, and are quieter than the Siamese. They have the ability to adjust to situations and are very agreeable. They crave for human attention and hate being left alone. These cats can help you around the house and express their love and affection by rubbing against your body. They love playing fetch and can be found playing with toys. Havana’s are curious cats and tends to investigate objects using their paws that can increase their curiosity.

Havana Browns are normally healthy; however they are prone to disease of the urinary tract and upper respiratory infections. The silky and glossy coat of these cats requires very little grooming. Weekly brushing is enough for these cats. If their ears look dirty you need to clean them using a gentle cleanser after consulting a vet. Regular brushing is also essential to prevent dental problems. Weekly once combing, brushing and nail trimming will ensure these cats stay healthy for a longer time. Bath is rarely required for these cats.

These cat breeds are friendly and are not wary of strangers. They have good energy levels, are intelligent and love playing and interacting with people. They can easily learn tricks and love challenges. They like to be involved in all the activities.

Havana Brown with Children and Pets

Havana browns love playing with children and are equally social with dogs. They like spending time with senior citizens and with families that have older children. They can be good friends with children who treat them with respect and will not get tired before the child finishes. These cats can live happily with cat friendly dogs and other cats due to their friendly disposition.